The continuous progress of Funeng comes from its initial efforts to keep pace with the world's advanced, from its unremitting technological innovation, value and cost innovation for the benefit of its customers, and at the same time, it promotes its realization efficiently, and comes from your concern and support. Funeng is willing to become the enterprise that the industry expects and the society expects together with you. 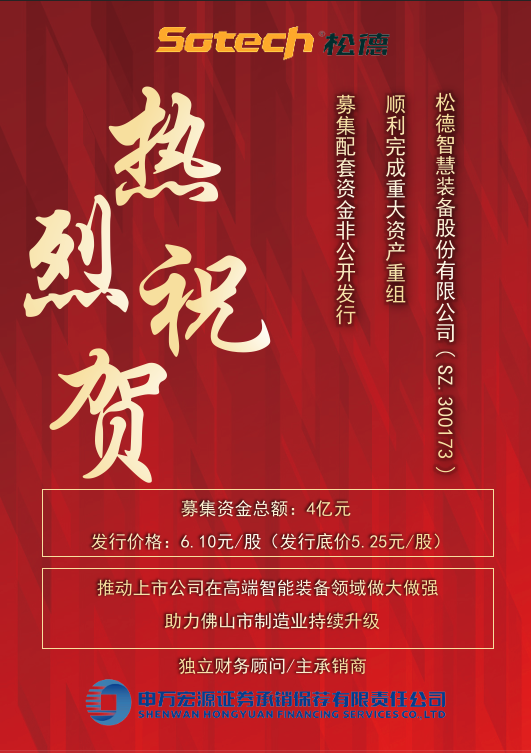 Recently, Songde Intelligent Equipment Co., Ltd. (hereinafter referred to as "smart Songde" or "the company") signed and announced the tripartite supervision cooperation agreement on special account storage of raised funds with Foshan Chancheng sub branch of Bank of Guangzhou Co., Ltd. and Shenwan Hongyuan securities underwriting and recommendation Co., Ltd., marking the successful completion of the major asset restructuring and raising supporting funds Gold work. There are more than 3 times of fund subscription in this fund raising, and the premium of issuing price is more than 16% than the base price. The target amount of RMB 400 million has been successfully completed.

Since the project of acquisition of 88% equity of Dongguan chaoye by smart Songde was launched in May last year, with the strong support of the state owned assets supervision and Administration Commission of Foshan City and Foshan public Holding Co., Ltd., it has received the reply on approval of Songde Intelligent Equipment Co., Ltd. to issue shares to Chaoyuan Technology (Hong Kong) Co., Ltd. and raise supporting funds (CSRC approval) on April 2, 2020 On June 12, 2020, the company completed the registration of non-public offering shares of the project. So far, the equity transfer work has come to an end, and the financial statements of Dongguan chaoye have been consolidated since May, more than two months ahead of the expected completion time of the project.

After obtaining the approval from the CSRC, the company not only fully promoted the equity transfer of the project, but also made solid preparations for the project to raise supporting funds. In total, it had close communication with 101 investors, held 9 one-to-one roadshows, 7 one-to-one roadshows, and more than 90 participating institutions participated in the roadshow, which laid a solid foundation for the subsequent formal launch of fund-raising and allocation.

On June 24, 2020, after the non-public offering scheme was approved by the CSRC, the company officially started the work of offering shares, and the first day of share issuance was set on June 29. According to the rules, the bottom price of the issue is 80% of the average trading price of 20 trading days before the issuance period, that is, 5.25 yuan / share. However, due to the initial stage of the issuance of the company's new regulations on refinancing by CSRC, the market capital was abundant, and the super industry assets were transferred smoothly in the early stage, and the company's industry was further expanded; Daewoo Jingdiao's business performance stabilized and rebounded, and the business situation continued to improve in the second quarter; the company's historical debt problems were gradually solved, and a number of accounts receivable payments were smoothly received The market continues to be optimistic about the development of smart Songde, and the closing price of smart Songde has exceeded 7.2 yuan / share on the trading day before the first day of the issuance period. On the morning of July 2, the project of supporting funds raised by the non-public offering was officially accepted by investors, and the response of investors was enthusiastic. The total amount of subscription actually participating in the offer exceeded the target amount by three times, and the issuance price was constantly pushed up. Finally, the issue price was fixed at 6.1 yuan per share, which was significantly higher than the base price.

On July 8, a total of 400 million yuan of subscription fund was transferred to the special account of the issuer for raised funds after deducting the independent financial consultant fee and underwriting fee. With the successful signing of the tripartite regulatory cooperation agreement on the special account storage of raised funds, the company has been able to use the funds in accordance with the original plan for the use of raised funds, and the listing registration of the subsequent issuance shares is also in progress.

The successful completion of this major asset restructuring and raising supporting funds indicates that the company's acquisition of Dongguan chaoye project will be completed. The successful completion of the project is inseparable from the strong support and guidance of the state owned assets supervision and Administration Commission of Foshan City and the joint efforts of all employees of the company. The successful receipt of the raised funds effectively eased the tight situation of the company's funds and opened up a new situation for the development of the company. In the new stage of development, the company will not forget its original intention, continue to adhere to the development strategy of combination of "extensive M &amp; a" and "endogenous development", pay close attention to the collection of accounts receivable, fully solve various historical problems, and better write a new chapter of high-quality development.